Antelope Canyon is a bucket list location for many photographers and it’s easy to see why.  Over the years I’ve seen beautiful images of it in National Geographic and numerous photography magazines.  In 2013 I was lucky enough to visit, but the reality wasn’t quite what I was expecting…

First of all there are actually two canyons – Lower and Upper.  They’re only a couple of miles apart but are quite different in character.  Having read the entry in “Photographing the South West: Volume 2” by Laurent Martres (which I would thoroughly recommend, despite the frustrating absence of maps) and feeling prepared I arrived at Lower Antelope Canyon first thing in the morning, just as they opened for the day.

There were a few small groups milling around waiting to go in, so I quickly paid my £30 for the photographer’s pass, which allowed you two hours to explore without a guide*. (* Due to its continued popularity for photography you now have to take a guided tour.)  I headed off down the unassuming crack in the ground into the canyon, but not knowing how long it’d take to get through the canyon I spent far too long photographing the area around the metal staircases in the upper section then had to rush the lower part (if you went over your time limit you had to pay extra).  Occasionally I had to step aside to allow tour groups past, which wasn’t too disruptive, but meant I did have to set up the same shot multiple times (a lot of it is too narrow for people to go around you, never mind your tripod).  It’s a beautiful canyon and a lot of the best shots I got were from lying flat on my back in the sand looking straight up. 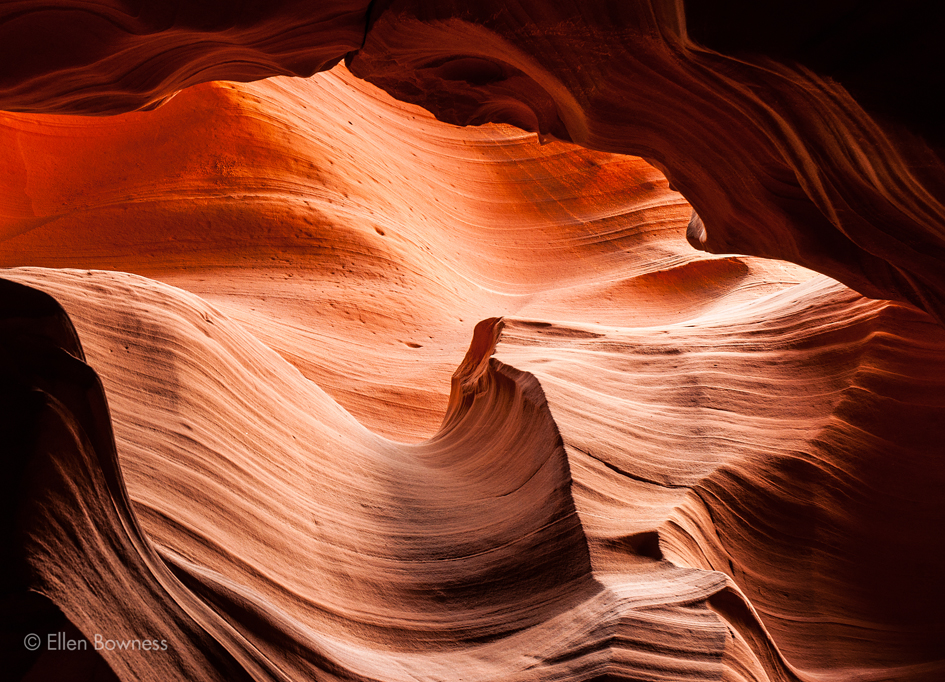 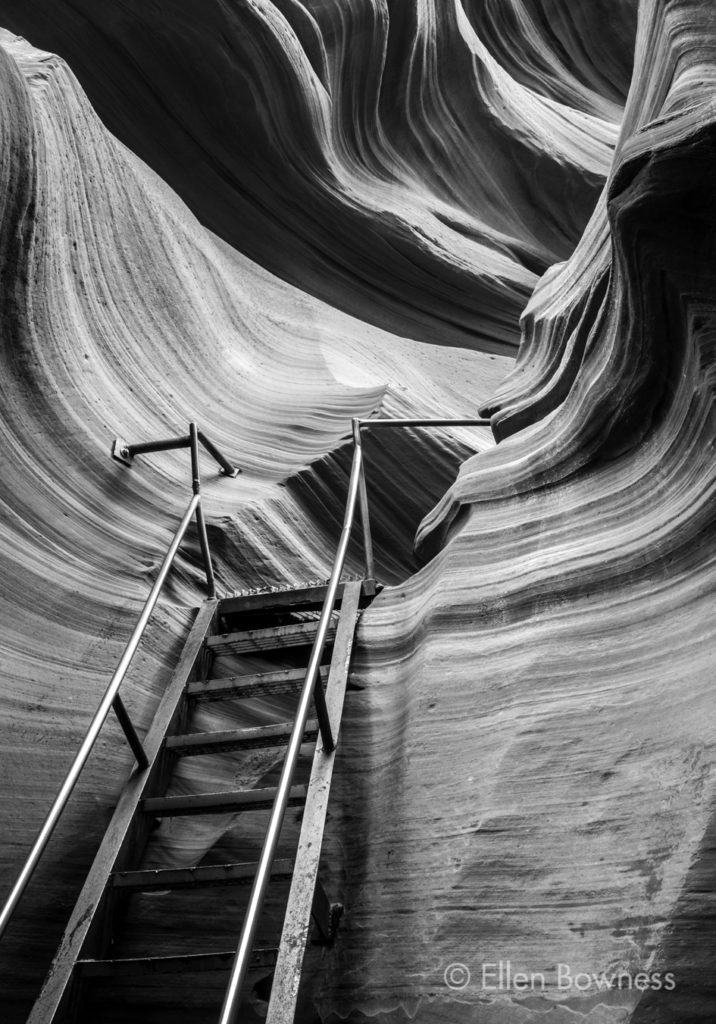 After a wonderful and fairly tranquil two hours in the lower canyon I headed over to Upper Antelope Canyon for my pre-booked photography tour.  You have to book a tour for this canyon and while not cheap (around £70 for the 2 hour photography tour) it’s the only way to do it.  It’s also a good idea to pre-book if you know when you’ll be visiting as they do limit visitor numbers at peak times.

I had purposely booked it for 11am as the only time you get the iconic shafts of light coming down if from late morning to just after noon (also, this only happens between April and October).  I jump on a jeep to be ferried to the canyon entrance and there are only 3 other people in the jeep (my other half and a nice couple from Germany) – all the signs were looking good.  However, when I reached the entrance I saw another 10 or so jeeps disgorging tourists into the canyon…  maybe not so good after all.  If you’re looking for a spiritual experience, then this time of day is not the time to go – the canyon was packed and noisy. We were informed that this was a ‘quiet day’ in comparison to others – I wouldn’t want to be there on a ‘busy’ day.  However, our guide did a fairly good job of shepherding us through the canyon to the most photogenic spots, stopping traffic occasionally so we could get shots that were clear of people.

When the shafts of light started to appear the craziness moved to a whole new level though. Multiple photography groups were all clamouring for the same shot, which resulted in us being lined up in particular spots – those with the widest angle lenses at the front on their knees and the rest standing behind.  It had a faint whiff of “firing squad” about it, and this is the point at which my other half gave up shooting completely after receiving one too many less than gentle elbows to get the best position. To highlight the shafts of light the guides throw handfuls of sand into the air, which although led to some great shots it resulted in a visit to WalMart afterwards to buy a blusher brush to clean it all out of my camera!  However, I did come away with my most beloved image from the entire trip, but if you knew how I got it you may not be so impressed.  I had always wondered how the sand fell down the canyon walls in the most photogenic places, but now know these shots are created by the tour guide shovelling sand onto the walls with a little scoop, then everyone frantically snapping away before it all falls off.

Two hours later I emerged into the sunlight again feeling slightly frazzled by the whole experience.  Don’t get me wrong – it’s a truly astonishing place and I would go back time and time again to photograph it, but it is not the peaceful place it is often portrayed as in the images you see. 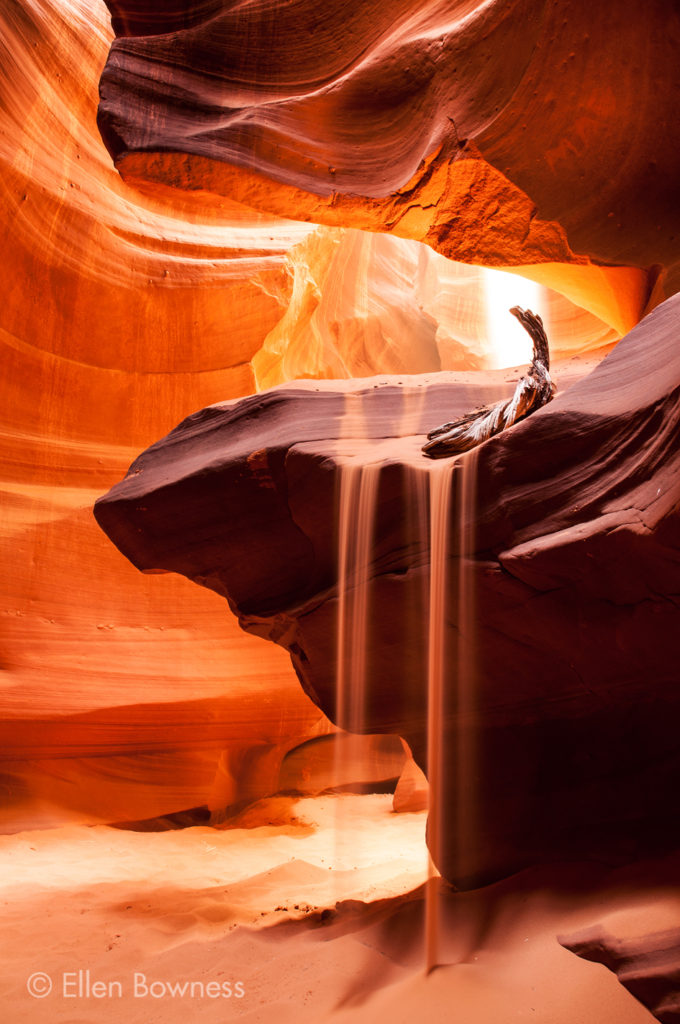